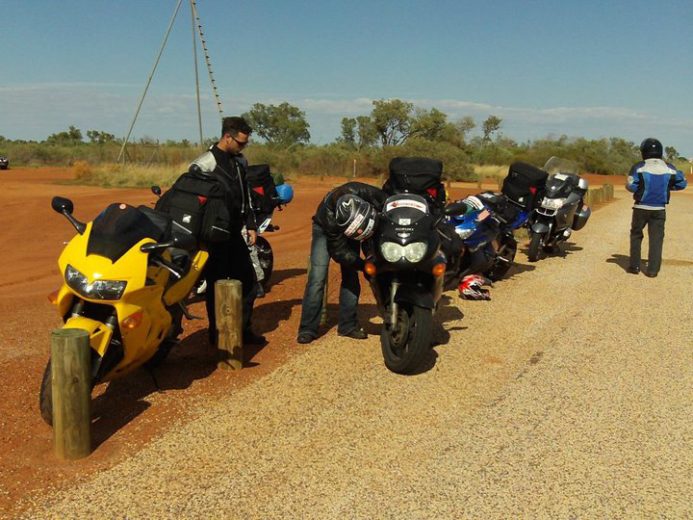 We had a bit of a stage-managed ride-out, with the ceremonial ‘meeting of the packs’ of East coast and West coast riders. I’m not sure how well it looked on camera so we’ll have to wait and see!

The ride-out was spectacular – we had a double-file formation ride out of Port Augusta and for the first 15km’s or so, until some people scooted ahead and the pack spread out along the Stuart Hwy. First stop was to Spud’s Roadhouse in Pimba, 172 km from Port Augusta. This was one of the longest journey’s of the trip, with no petrol in between. At Pimba, there were 2 petrol pumps for 45+ bikes…needless to say it took a while for people to get filled up (especially as they only let the next person fuel after the previous person paid) I filled the tanks of 5 bikes to help speed things up!

Woomera was a few km up the road, and to me, it’s a strange place – it reminded me of a ghost town (Raz tells me this is typical of an air force base). There were a few planes and rockets on display in various places, but not much else to look at (probably by design). I got a weird vibe about the place – there were cars about but no people walking around (except other riders), and overall it looked deserted. (There were people in the shops and going about their business, but it did not have the look of a thriving town like some of the others we visited). I’m not sure I am describing it well, but it did feel weird. 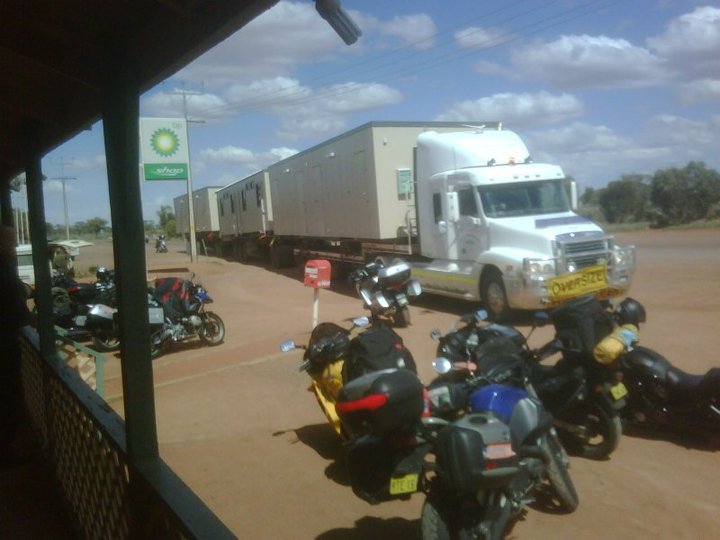 Heading up the Stuart Hwy, the next stop was Glendambo – The last stop for fuel before Coober Pedy. Glendambo is nothing more than a place to stop and refuel (there is a roadhouse, restaurant, store & caravan park). Here there were many bikers filling 5 or 10L jerry cans with fuel to ensure they were able to make it to Coober Pedy and not be stranded – Coober Pedy is 254km from Glendambo and not all bikes could make it without a fuel stop. Most used this as the lunch stop for the day, with far more on offer than back at Spud’s Roadhouse!

I rode this section of the road with Rob (aka my ‘wingman’) and kept up a fairly steady pace, stopping at 2 well-spaced rest stops (80km from Glendambo and 70km from Coober Pedy. At the first stop we met up with Micha and rode with him for a while, but following him with the crosswinds was scary to look at (as his bike is an enduro bike, it has a higher centre of gravity so looks more likely to topple over)We rode together (Jim, Micha & I) to the 2nd rest stop, passing a number of the other riders who’d decided to stop at the half-way point. 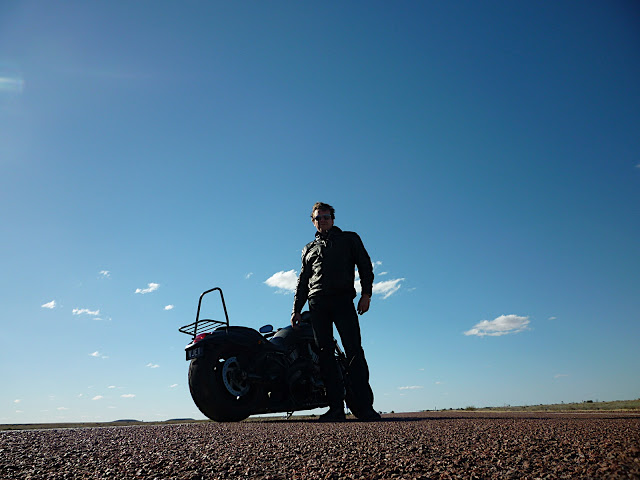 We later found out there were some shenanigans involving James lying semi-naked on various bikes, to the amusement of the rest. One of the riders had also lost a gear lever, somewhere in the previous 150km! (he eventually got going with a pair of pliers and some wire – a-la MacGyver!) This pic of Robbie with his bike is an awesome one – one that reminded me of Mad Max!

The run into Coober Pedy turned out to be one of the most difficult due to the strong crosswind from the west – you had to ride at an angle to keep it in your lane! We rode out of the 2nd stop with Jim (and his companion ‘Blackie’, a stuffed toy) and Samps from Adelaide. The pic you see here is Jim – notice how Blackie is leaned over to the right due to the wind. This was the most difficult part of the ride as it was towards the end of the day and you had to stay mentally alert and physically man-handle the bike to stop it wandering off the road. Once we hit Coober Pedy I was relieved – and could finally relax. A top-up for fuel (only 17L went in, I had enough fuel for another 60km). 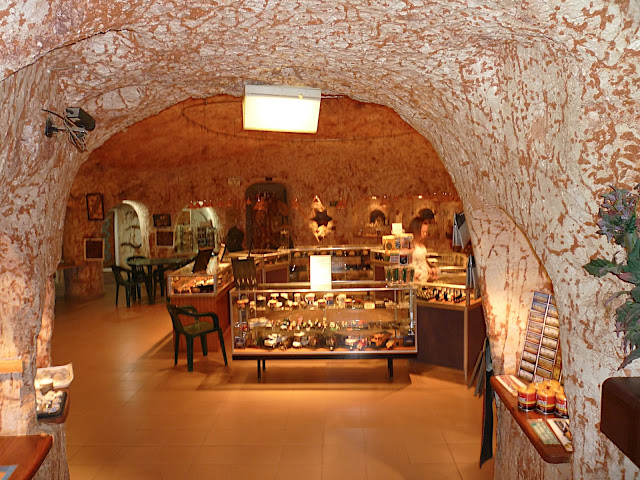 Radeka’s Underground Motel was the stop for the night, built inside an old opal mine – the place was spectacular, especially the dungeon – There were many dorm rooms, bunk rooms, and motel rooms. The temperature in the rooms was great – not too hot and not too cold – one of the best ways of keeping the temperature constant is to dig into the earth. We had a room with a double bed and 4 bunks for 2 people – next time we should all bunk in together and save some $. We’d parked the bikes outside the rooms and had a great time chatting amongst ourselves as well as another couple also on a bike (in great company). Riders trickled in and the story of fighting the wind was prevalent amongst the talk. The exploits of James was also high on top ‘must talk about’ list

Dinner was another sausage sizzle put on by the Lions Club after which Steve Andrews gave a small talk, and we were introduced to Steve Baines who would join us on the ride to Glen Helen. We also heard from a couple of local mental health workers on the state of things in Coober Pedy and how important our message is about depression awareness.