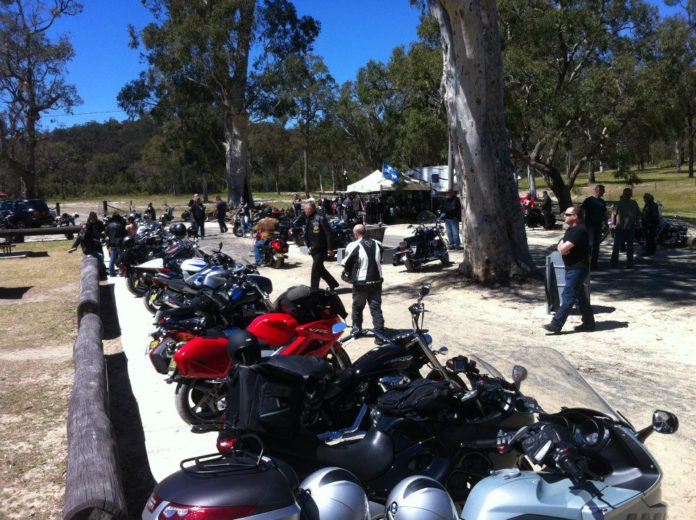 We’d worked out a plan to have Jack meet us in Bungendore at 9am (after we found breakfast and coffee). Although the cafe we chose was set back from the road, it was still a hive of activity with the locals. My big brekkie was fabulous, and just what I needed to get the day underway. The others nursed their coffee and soon after we determined that Jack wasn’t going to meet us as at 8:45am he was woken by Dazza’s phone call. He promised to get riding and meet us in Braidwood. We were not in a rush to keep riding so we headed out at a leisurely pace back to Braidwood – the ride was nowhere near as spectacular as our sunset ride yesterday! 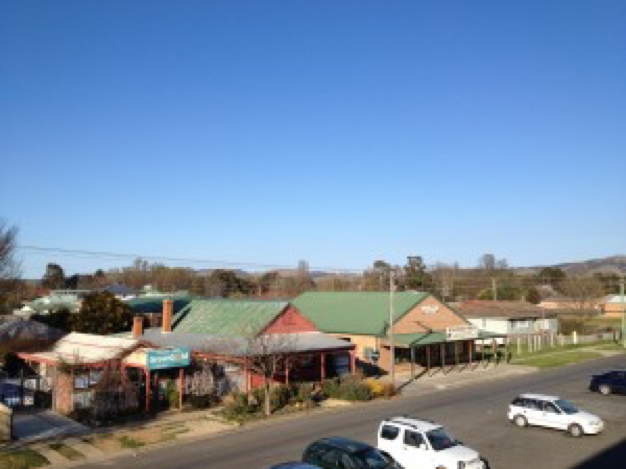 We’d filled up and parked outside the Braidwood bakery (where else?) to wait for Jack. For once, a pie and choccie milk was not on the menu for me, as I’d had a huge breakfast in Bungendore. Dazza shared some of his insights into his BDR experience this year, we spoke about life, love and everything in between when Jack rocked up.

Although the road headed towards Bateman’s Bay, we weren’t due to stop there – between Braidwood and Bateman’s Bay is one of the best roads known as the Kings Hwy that goes over Clyde Mountain. Many Canberrans use this road on a regular basis, sometimes choosing to go for a burger run from Canberra to Bateman’s Bay.

The Kings Hwy is a mix of fast, open sweepers and tight twisties interspersed with some long-ish straights. Along with the fabulous spring weather , a perfect recipe for a great morning’s ride. Jack disappeared off into the distance, claiming he had to ‘let the dogs out’. Dazza, Raz & I were temporarily split up by some traffic that inevitably appears to hinder progress. After a few km, the cars were dispatched and we were a posse again (those “overtaking lane _km ahead” signs are priceless, and something to look forward to when caught behind traffic)

The crisp morning air, the gentle breeze, the smells of the bush made for a fabulous morning’s ride up to the big roundabout outside Bateman’s Bay. We chose to turn leaft and head straight up to Nowra, where I’d organised an impromptu lunch with good friends I’ve known for many many years. It was later on that e’d fond out that Raz had never been to Bateman’s Bay – Oh well, we decided we’d need to come back again in the future and include Bateman’s Bay on the itinerary!

I led the way towards Nowra up the Princes Hwy. Although it’s not as fun as the twisties, it was a great run, plenty of opportunities to overtake, long sweeping corners, great visibility and little traffic made for a very smooth run. There was a period of about 20 mins where I cannot tell you what had happened. The road was smooth. The bike was humming along silently, The corners flowed into each other in one smooth motion. I cannot remember changing gears, braking, thinking, breathing or anything else – it was a blissful ride where everything came together. These are the moments you truly cherish when riding.

Our destination was our lunch stop with good friends of mine, Lisa & Ian who put on a BBQ lunch for us and gave us sustenance for the road. The running joke was that when you go on a BlackDogRide, you get fed sausages in bread – that’s precisely what we had (along with salads and lamb!)

After a fill-up at the servo, our destination was up to Kangaroo Valley, where shortly after Daza & Jack would depart, heading back to Canberra, leaving Raz and myself to ride through Macquarie Pass. Well, that was the plan! A short way up the mountain, we’d caught a train of 4 wheeled vehicles that slowed us right down. I noticed that Dazza was not behind, and soon pulled over to let him catch up. We’d heard that Dazza had gone down, so turned around to find him. After we reached him and found out he was OK, we found out that he’d decided to stop on the side of the road and lost his footing when trying to put the bike on its stand.

The damage amounted to a broken front brake lever, broken pillion footpeg, scuffs and scratches and a slightly dented ego – nothing that would prevent him riding home. We trundled off for a leisurely Sunday ride through Kangaroo Valley, up past Fitzroy Falls to the point where we would say goodbye to Dazza & Jack and head up to Robertson.

Even though it wasn’t pie time, no trip (of mine) through Robertson is complete without saying hello to 2 former members of our OzVFR group, Ben & Boky. I also said farewell to Fabian, another OzVFR rider who passed away recently. RIP guys.

I led the way towards Macquarie (Mac) Pass – on a good day this ride is fantastic, but there were a few cars on the road and it made for a fairly sedate ride home. Raz and I choosing to take it easy and passing the cars at the bottom when the opportunity arose. We rode together along the freeway for the rest of the journey, never straying too far from each other, even in traffic. Sums up the spirit of the weekend – one of bonding with our fellow riding buddies.

Everyone arrived home safe and sound and we’re now planning the next ride, because it’s been too long and we don’t wish it to be!