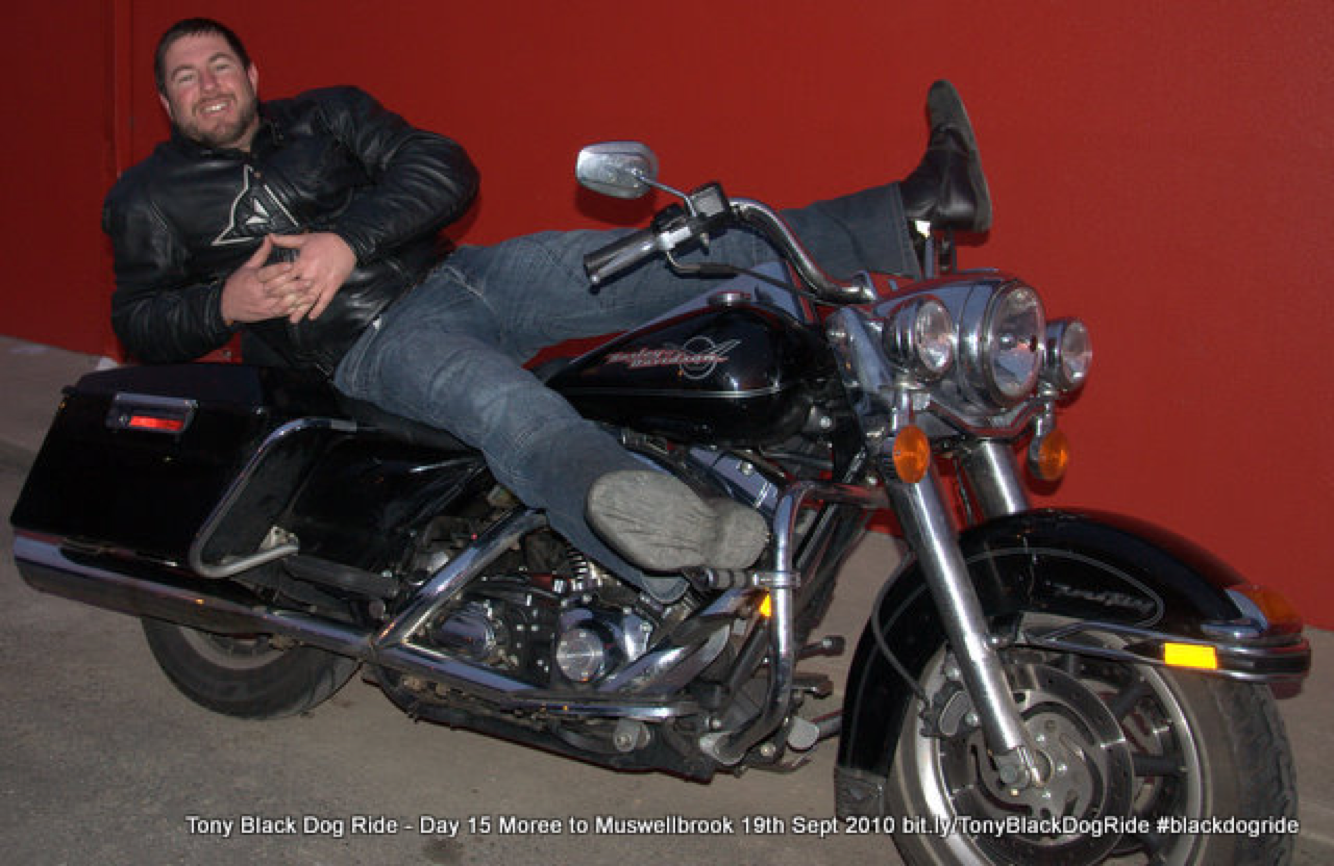 The day started under cloudy skies and a light drizzle – it was a wet-weather gear start to the ride, one that doesn’t always imbue you with a good mood; the mood this morning was quite somber. The weariness had taken hold of a number of people and it looked as though they were ready to go home. This penultimate stint was always going to be tough because we were so close to home BUT not really able to get there (Sure, we could have done a 680km ride to the end, but I decided to make the last days’ stretch under 250km so we could get home to our loved ones in daylight. More about that leg of the journey in the next blog post!) 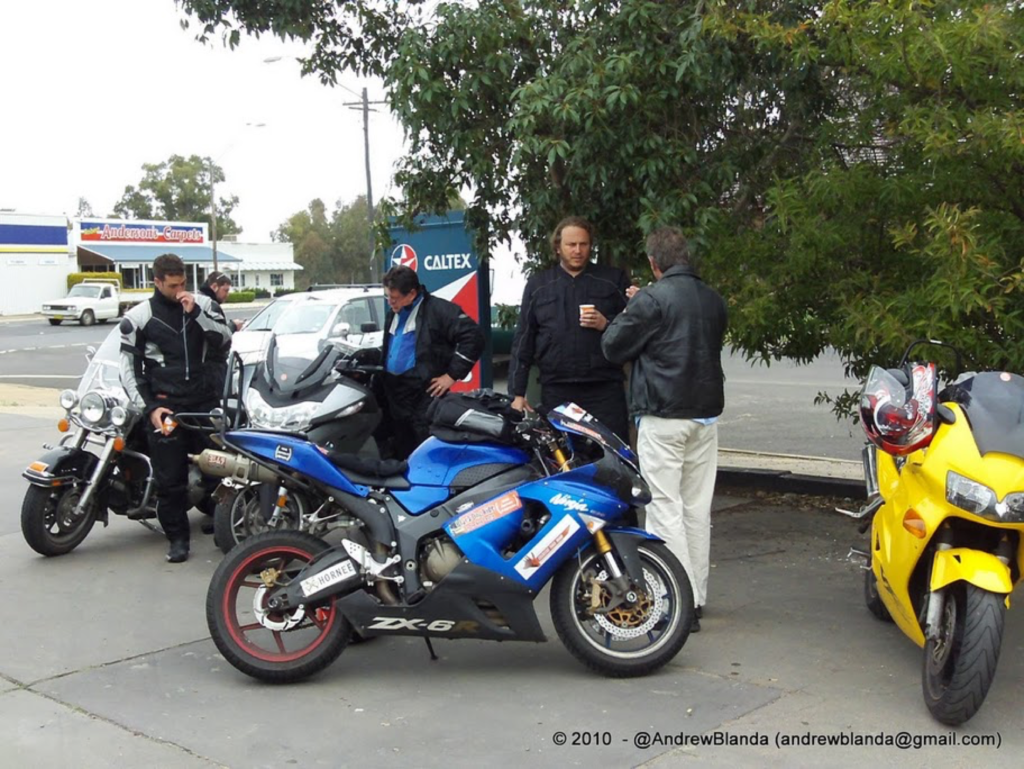 There wasn’t much to see on the road between Moree and Narrabri, as it began to look like the same sort of country as we entered Moree the afternoon before. However, even under gray & drizzly skies, the scenery looked pretty spectacular. 98km was an easy first stint and I was happy to ride on, however, neglected to think of the poor lungs of a couple of the riders who simply couldn’t ride on without a cigarette! OK, Some needed fuel, the toilet and something to drink, so we gathered at a service station in Narrabri. One sign that weariness had set in is just how long a quick stretch stop became – I could swear this stop was almost an hour, and we’d only been riding for 45 mins!

Heading down the Kamilaroi Hwy (named after the Kamilaroi Aboriginal People) towards Boggabri and Gunnedah. We’d ridden through Boggabri which looks like a large town on the map but shows very little life along the highway. Check out (what looks to be) a former hotel (now labeled ‘Champion Stores’ and ‘MacDonald Stores’). A left turn to continue on the highway towards Gunnedah. 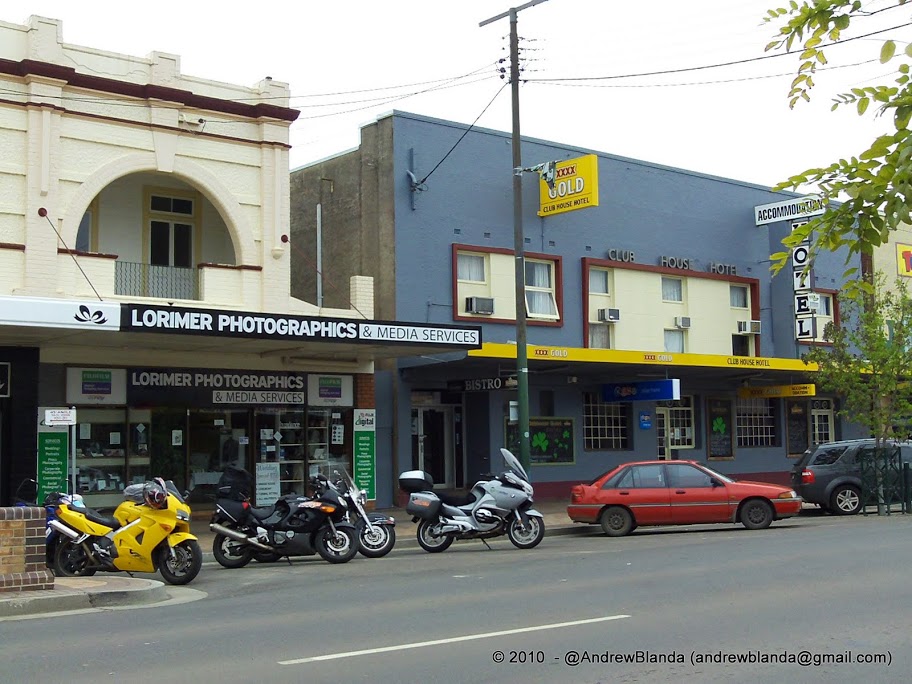 Once in Gunnedah, Raz & I took the opportunity to stock up on some essentials (nuts and chocolate) before hitting the Subway for lunch. There wasn’t much choice on a Sunday afternoon, and although the fish & chip shop looked inviting, fried food was the last thing on our minds. We were exposed to one of the mainstays of country life – the utes doing laps of the main street! Chaos wasn’t far on today’s leg, with some of us not finding the petrol station to fuel up. A couple of trips up and down the main street (doing laps of our own) had half of us finding the fuel whilst the other half went on. There was another quick stretch stop in Quirindi before pushing onto Muswellbrook. 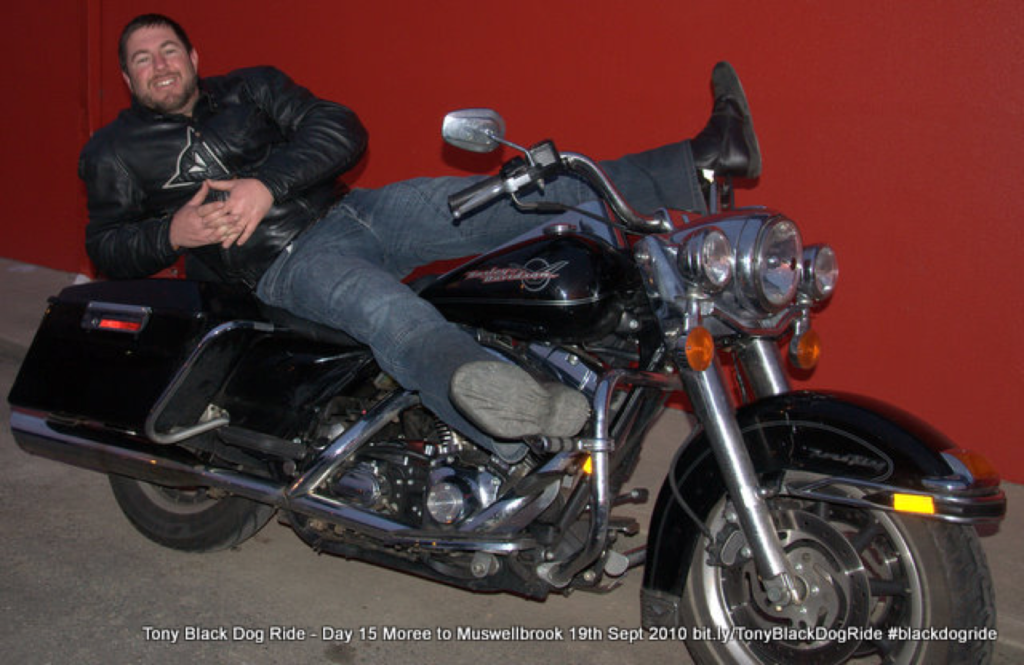 There was a lot more traffic on the roads as we headed into Scone & Aberdeen, which resulted in us being separated by quite a margin! Rob, James & I set to find somewhere to sleep for the night. Tony was even heard to mutter something along the lines of “Andrew I thought you love to have everything planned out, you seem to be able to fly by the seat of your pants as well.”  A couple of phone calls later (with some wonderful help from the local information center) soon had us checking into the Pinaroo Leisure Park, on the highway headed out of town where again we scored a cabin and enough grass to pitch 3 tents! Whilst there was still a semblance of light in the sky, Shane dragged us out on the bikes again for a glamor photo shoot against a local red wall (More pictures to come from Shane D Photo, but you can see one such ‘glamour’ shot to the right!)

Rob rounded up a 6-pack and we headed off to KFC for dinner and retreated to the cabin to enjoy dinner and a drink and recount stories from the day and the ride. There were smiles on everyone’s faces but the mood had shifted to one of lethargy and tiredness. One day to go!