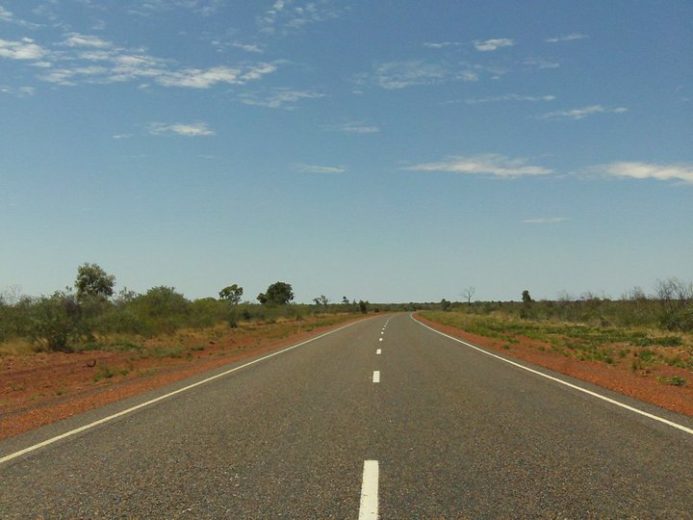 This was one of the straightest pieces of road we traveled down – there were a few curves here & there and no change in altitude (i.e. no hills). It was great to get this road out of the way in the early morning – otherwise, the road can be deadly if you did it in the afternoon when you really want to have a rest! 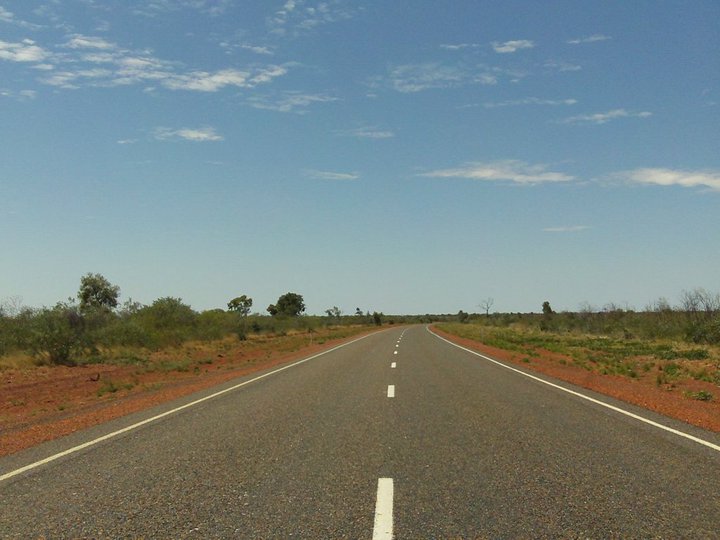 Morning tea + fuel stop in Balranald, not much of note, however, it is the location where the first telephone was used in Australia (it was installed at the nearby ‘Yanga’ station to allow communications between the shearers shed and the homestead). We met a local fellow in Balranald on his Honda Lounge-chair (aka Goldwing) who would have come with us on the ride…had he known about it before we got there! He is retired and loves to ride so headed out of town with us. We thought he’d be down the back of the pack, but after a few K’s, he disappeared into the distance.

I had to duck off at a rest area as I had fruit with me, and due to the fruit fly exclusion zones (these protect the  fruit-growing industry in Australia), I had to dump the fruit – Once I pulled up at the rest area, I was greeted by the sight of Lake Benanee – I’d been so focused on dumping the fruit, I’d not noticed it! Check out the video:

I was so far behind the others I caught the slower pack and had a quick chat to them in Euston, before continuing along the Sturt Hwy towards Mildura. Somewhere along here I picked out a police car ahead and soon realised he’d pulled over one of the riders for 134km/h in an 110km/h zone. A few $ lighter, we rode together into Mildura to regroup at the Grand Hotel for lunch.

In Mildura, Raz and I had both spotted that we’d parked opposite the WIN(TV) News office! After a quick bite to eat, I wandered over to chat with them and see if a journalist or cameraman was available to cover our ride (I call it opportunistic journalism). Fortuitously enough, Ben came out with his video camera and filmed us on the bikes – we had a chat about how news stories are presented and he said they rarely get stories (like ours) that come to them. In the end, we’d all ridden out and hopefully made a few seconds on the news that night!

The road between Mildura and Renmark is unremarkable except for its straightness. There is nothing much to do except keep the bike pointed straight. And upright. And for you to stay awake. To keep myself entertained, I took some pics of the scenery from the bike and found that although the pictures (mostly) turned out crap, there are some nice ones in there. We’ll be posting MORE pics and videos once we reach Alice Springs/Glen Helen! Oh, the most exciting piece of this ride was regrouping under the ‘tyre’ at the border crossing into SA!

Once in Renmark, we missed our caravan park because we were too busy saying ‘oooh ahh look at the lovely bridge’ (across the Murray River). Chaos ensued as we found the wrong caravan park then proceeded to have a gang of 4 (including me) zig when we should have zagged, and you guessed it – Iwe got lost! When stuck in a country town, where do you go? The community info board! Sure enough, with a bit of finger pointing and helmet shouting, we found our nightly home (as some of us wear earplugs whilst helmeted, you may need to shot on occasion. If your helmet is also on, you may need to shout twice as loud.)

Dinner was again a great spread put on by the Renmark Lions – We also had the privilege of meeting a family from Lyrup, Des & Sher and their son Ivan who is going through his own battles with depression. We had a good chat about the ride and why we’re doing it, and they really appreciated the opportunity to talk about it with us as well as Robyn & Roger (local counselors from the medical community) who offered their experience and support. Big Thanks to Allen & Graham (+ their Lions members) from the Renmark Lions for putting on such a great dinner.

The evening dragged on a lot longer than expected when a disc-lock refused to come off one of the bikes (the disc lock was put on as the key to the bike was lost earlier in the day. The bike can still start without it). It took almost an hour to remove the lock, but as usual, it came free AFTER the call was put into roadside assistance.