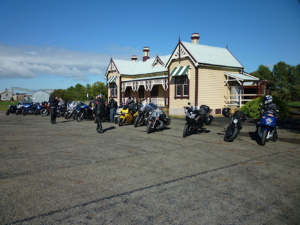 As was expected, chaos set in early today – with many not getting their breakfast until after 9am! We’ll have to tighten up as the km’s will start to increase from here on and 8am and 7am starts beckon soon!

We assembled outside the “Men’s Shed” and lined the bikes up for a photoshoot – we also used it as a great way to ride out of Grenfell in formation for the cameras! The Men’s Shed is a place where men can gather and share their stories, experience and generally provide support for each other. Visit the Grenfell Men’s Shed link for more information.

We headed out under sunny skies, and it wasn’t long before we were greeted by fields of golden canola in the sunshine – the road was in great condition, the weather was fine, and we were back on the road. I get a bit angsty when we don’t leave on time, as a 30 min delay at the start of the day manifests itself as the day progresses. I don’t like arriving at our destination late in the afternoon, and since we’re heading west, with the sun in your eyes!

I did manage to take some pictures from the road today, I’ve included them in the blog post. The Kodak ZX1 is not too bad to whipping out and taking some video or happy snaps! I even managed a self-portrait – to which Michael Sluis from the Black Dog Institute says “Self-absorption is one sign you could be headed for depression”. Chuckles all round ensued!

We made great time to West Wyalong, where a scheduled 20 min stop became 45 mins, and we jokingly renamed it the latte stop as people seemed to want for nothing more than to sit around drinking coffee! Again I performed a herding of the cats and we were soon on our way again. Caz (the BlackDogRide official videographer) had again set up just outside West Wyalong to capture us leaving as a group for more straight roads, sunshine and canola. The sun hid behind the clouds for most of the trip, keeping temperatures down and throwing down a little rain here and there. Again, all riders had a ball – we mostly kept together until the next fuel stop at Goolgowi.

The sign promised “Rosie’s chicken – THE tastiest chicken in Australia”, and I simply had to put that to the test. It was pretty bloody amazing chicken, so much so that we almost sold the place out. We had one little lost sheep on this leg of the journey when the pannier on his bike auto-ejected for the second time (it also happened on Mt Panorama yesterday). A quick strap-down job from one of the other riders soon sorted that out!

The ride into Hay way eventful for one of the Riding4aCause crew (read more here).

Once at Hay, we had a couple of hours to unwind – some walked into town, I donned my running shoes and headed out for a 30 min run, whilst others had a quick snooze. The evening was a little bit of a letdown attendance-wise as no-one from the local community had shown up – we met the Hay Lions people and as always, they were wonderfully warm and receptive to us. I chatted with a few of the ladies who’d cooked up an enormously great meal; chicken curry, lasagne, salad, tuna bake, meatballs, soup, macaroni & Cheese + more! We were all very very appreciative of the meal as we’d gone back for seconds! Despite the lack of local showing, it was great to be warmly received by the Hay Lions Club.

Tomorrow: Riding the Hay Plain, through Balranald & Mildura onto Renmark. We also will manage to touch 3 states in the one journey tomorrow!