Rideout to Leura for what had to have been the windiest and coldest fuel fill-up in history! We ended up with 27 bikes at Leura, after approx 35 riders departed the Deus Ex Machina Cafe. The one word to sum up the ride was WINDY! The ride was punctuated by a windy run across the mountains, with many riders reporting being blown sideways quite a few times. 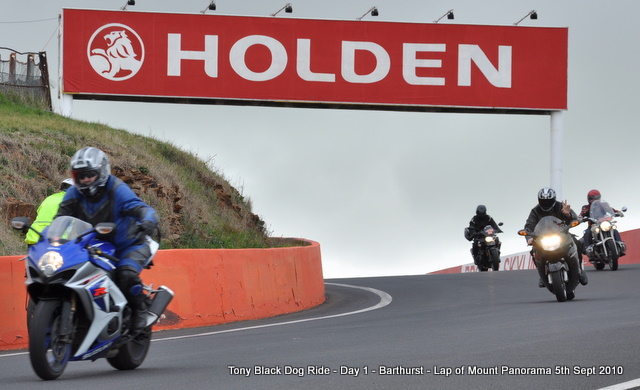 Once we reached Bathurst, ‘chaos’ set in early as there was mix-up with the meet point. Here starteth the cat herding! We ended up with 2 groups of people – I herded up the 2nd lot of cats and ferried them to Elie’s Cafe with the first lot of cats. The service was wonderful AND we had our lunch pretty quickly once they were ordered – not an easy thing to do when 22 people descend at once wanting to be fed!

Before we left Bathurst, everyone decided on a quick tour around Mt Panorama – A number of us lined up on the start line for the obligatory photos before setting off at a sedated pace. Various comments from the riders included ‘geez how steep was that’ and ‘some of those corners are a LOT tighter than they seem on TV!’ Once around wasn’t enough for some (including me), so I followed 3 others who’d gone around for another tour! We passed 2 of the riders going the other way, and seemed to lose them when the larger pack moved off.

After a fill-up in the town center, we were off for a leisurely tour through Cowra to Grenfell. We did encounter some light drizzle on the way to Bathurst, but we found the rest of it on the way to Cowra. My temperature gauge did not get above 9 degrees. I’d had my Hornee jeans on all day but by now they were wet and I was cold. The heated handgrips helped but I could not shake off the feeling of being chilled to the bone. By this time most of the others had their layers on as well as the rain gear (which is windproof). A quick stop in Cowra for a top-up (for some) as well as a change of clothes for me (to get/stay warmer) – and thanks to the official #BlackDogRide videographer Caz, sometime, somewhere the video will see the light of day! Calls were made, voicemails left, and the 56km to Grenfell beckoned.

The ride from Cowra to Grenfell (into the sunset) was the highlight of the day in many riders’ minds! The wind had died down (seemingly); We rode into the glorious afternoon sun through gorgeously golden canola fields with a beautifully smooth and flowing road ahead. They were the perfect conditions for an afternoon motorcycle ride.

We arrived in Grenfell about 30 mins after our scheduled arrival time to the delight of the Grenfell Motel owner, who thought we weren’t coming at all! A quick freshen up and settling in before heading to the Royal Hotel for a lovely dinner and presentation from Michael Sluis from the Black Dog Institute. The 2 wayward wanderers found the place in the end – all’s well when everyone has arrived.

Day 2 will see us travel to Hay through West Wyalong!